Another demo of Glow at last nights staff meeting, this time looking at Glow Light, Glow Blogs and the National Assessement Resource (NAR).

Starting with the Glow login screen, familiar to all, I asked a few questions about who was using Glow, who'd logged in recently and who'd seen the new 'landing page'. Then I logged in, and a fair few in the audience went 'Oooooh!' as Glow Light appeared on the screen. 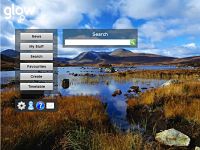 After a quick click through the standard buttons (avoiding 'Timetable' as our Click&Go and Glow still aren't speaking) I briefly showed colleagues how to add their own buttons - adding one to my Glow Light for our Computer Booking Glow group. Another few positive sounds emanated from the audience at this point.

Then onto Glow Blogs, I gave a brief explanation of Blogs in general, what they could be used for in school, by both staff and pupils using the first entry in my own Glow Blog as a backdrop. Having talked about using blogs for ePortfolio work, I explained what's being done with our Higher Photography course and showed their class blog that pupils are currently using to upload pictures for working on them in school. This got an 'Ahhhh', from my colleagues.  I explained further that individual pupil blogs are planned for the near future, and that each will be linked to from the class blog, with pupils being encouraged to seek and provide comments on each others' work. 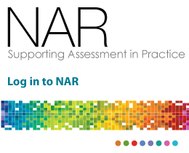 Next was a quick look at the NAR, just to show what a typical assessment exemplar looked like, pointing out the huge breadth of media that can be used for evidence, and showing a bit of video of a pupil's presentation on Alexander Fleming. NAR got a 'hmmmmmm', but I think it was a good 'hmmmmmm'.

By now, my bit was done, and my colleague Gordon Urquhart, our PT of MFL, showcased a fantastic Glow Meet based project that two of his staff are involved in, teaching French to pupils on the island of Tiree - 'Bonjour Tiree!'.

This is a genuinely ground-breaking project, with teachers in Helensburgh delivering a French language course remotely to pupils via the Marratech video conferencing tool, to groups of between 4 and about 20 pupils from P4/5 up to Int 2 level.

Gordon and our French probationer, Helene Bernard (who was in a different room), then did a demo of Glow Meet, using the whiteboard tool to play a couple of games, showing the interactivity available to each participant.

This was an incredibly powerful demo of the potential of Glow, and I would hope it has inspired some more of my colleagues to want to try something themselves to #makeuseofglow.