After all the preparation, and an early start this morning, it looked like it might be a wash out given the cloud cover.

Unprepared to admit defeat, I got set up early in the hope that the sun might make an appearance through the clouds at some point. 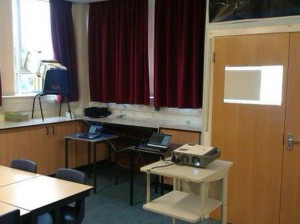 Patience was rewarded early on, if only fleetingly...

Only sporadic glimpses through the clouds were to follow.

With the pinhole viewer barely picking up anything, data gathering fell to the temperature and light sensors.

Initially the temperature shows an upward trend as the sun warms the cool morning air. As the eclipse starts at about the 4000 second mark, it's quite clear that the temperature begins to drop, falling from a a maximum of about 11 degrees to a minimum of just over 8 between 5500-6000 seconds, then steadily rising.

The light graph shows just what an effect the cloud cover had early on, with large peaks and dips as it cleared and covered over. Again at about 4000 s the light level drops, reaching a minimum at around the same time as the temperature, before rising again. The light sensor data plateaus due to it saturating in normal levels of daylight.

The video from the pinhole viewer and data from the sensors was grabbed every 10 seconds using Chronolapse which was also used to stitch the images together to make a timelapse of the whole event.

Another experiment to measure the radiation levels during the eclipse was even less successful, showing nothing of any significance, despite a tantalising drop in the count in the 40-50 minute period. This promptly shot back up to normal levels in the 50-60 minute period, reinforcing my understanding of the random nature of this parameter. 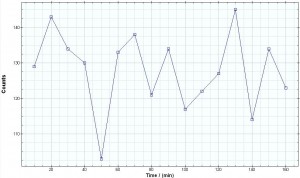 Whilst this was all happening I was able to describe and explain the phenomena of eclipses to my classes (and those of a few colleagues who brought their charges along to see what was happening). It might not have been the huge success I'd hoped for, but it was great fun and really engaged the classes who got to see what was going on in my room. The temperature and light data were both better than I had hoped for, even if the pinhole viewer didn't deliver the goods. Can't do much about the weather, though. Especially in Scotland. Some folk were able to get really clear views, my pal @alanbboyd sent me this great image - 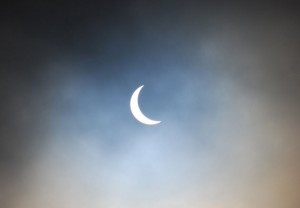 Really looking forward to the next decent eclipse in these parts in 2029!